Living on a canal boat traveling down the Erie Canal, to the Hudson River, to Red Hook, Brooklyn's Erie Basin was a job and a way of life for some people, but for three women from Brooklyn, in the summer of 1891, it was a great restful vacation. The Illustrated Buffallo Express describes their voyage and life on a canal boat. 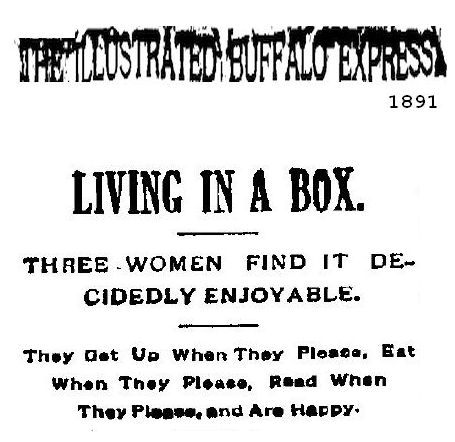 Living in a Box: Three-Women Find It Decidedly Enjoyable

The people who are rushing to and from and tearing madly about the world during the hot weather in the vain search for a perfect summer vacation last week could have gone down into the Erie Basin and found there in the little cabin of a canal-boat what they were seeking. Some women were there who are making a journey from Brooklyn to Buffalo and back through the canal on the boat Helena, and they are happy in what they believe an ideal vacation life. What would make a perfect vacation? Peacefulness, quiet, and an enforced rest which nothing can disturb, complete alienation from the pressure of ordinary worldly affairs, a continual easy change of delightful scenery? All these are given in a trip through the canal.

An EXPRESS reporter, hearing that such a party was on board the canal-boat Helena. visited them. The Helena is what is called a consort. At the head of every canal-boat tow is the captain's boat, and with her there is generally a consort. The boat to which the Helena is consort is the Montana, commanded by Capt. Peter Devoe. a veteran of the canal service. Lying along the docks in the Erie Basin were 150 canal-boats or more, a throng of them tied side by side. [Lying] so solid and so evenly that their decks seem almost like a level floor. In the outermost file of this throng, the ninth boat from shore, the reporter found the Montana, and next inside her was her consort, the Helena.

The reporter did not have to knock, for he was seen from the door as he crossed the deck. He was greeted at the little hatchway by a woman, and at first sat down upon the deck to talk, while his hostess sat upon the stairs leading down into the cabin. After some conversation he was invited down into the cabin, and there he finished his talk about life on board a canal-boat.

He found two ladies on board, with a young girl, the daughter of one of them. They would not give their names. They are from Fishkill. or more properly Mattawan, upon the Hudson. They are taking the trip for pleasure, and arrived here on Tuesday morning, after a passage of twelve days from Brooklyn, starting July 6th. The two ladies made the west-bound trip last year in the Helena but returned home by rail. This year they are going back in the same way they came.

They live in the cabin of the canal-boat, little realm 13 feet broad by 15 feet long in extreme dimensions Bat life in a canal boat, and on all quarters where space is limited, is reduced to a science, and that cabin would be the delight of a housekeeper and the hopeless envy of a man. The cabin is like a box, part below and part above the deck. As you go down the little stairway, you enter the parlor, which is also the kitchen and sitting-room. The reporter's head struck the timbers, but he was tall in one corner was the table set for supper. In the corner diagonally across was the above sitting on a little platform, and so arranged that when not in use a door could be slid out from each side meeting in front to shut the stove all up by itself in a little room less than six feet square. All the other sides of the room but one ware filled with lockers. There were books, lamps, a clock, and other things upon the top of these cupboards. This kitchen was only a part of the cabin. Opening off it. further in the body of the boat, were the cabins. There was a berth on each side. These looked short enough for dwarfs, but where the reporter said so he was shown that the foot of these beds projected into niches, so to speak. in the wall, so that a person could really lie at full length. A sliding door can be running out to divide this cabin into two with one of the berths in each; and another door still can be run across to separate them from the kitchen. To see these doors come out from their hiding places is almost as good as having an Aladdin's lamp to build rooms at command, they are so mysterious and so complete. Everything is the perfection of handiness.

Here these women live. They say they wondered that other people did not take trip in canal-boats, they are so delightful. Here is the story about as they told it They enjoyed their experiences so much that it seemed to be pleasant to them to talk about it.

"We are neighbors and friends in Fishkill We can hardly tell how we first came to take a trip, but we had always wanted to, and, besides, it seemed to us that the opportunity to taste this kind of life will pass away before long. <

"We live just as we want to. We bring books with us. a lamp to read by, a nightlamp, and a clock. We have sunbonnets to wear it we go out. We brought a little food with us. and there are Horns on all the leaves, mid we can but all we want. Capt. Devoe has been. So, years of the canal and tell* us all about everything. We get up when we choose and do as we want to. We must rest.

"To go through the locks at Lock port is alone worth the whole trip. There Is beautiful scenery all along the canal. There are rich farms and comfortable homesteads, and interesting factories, and a continual change all the way. It is not all level. There is rolling country some of the way. Little Valley, and all the Mohawk Valley, are beautiful. The boats go on night and day, and we only hope that when we go back we may be by daytime over the parts we passed at night coming.

"Everything is quiet, and so peaceful on the boats. There are a great many interesting incidents and funny occurrences, and many parts of the canal have their stories and legends

"We hear the stories and legend? about different parts of the canal. One level we passed through, on this side of Port Jackson, is railed the Haunted Level. The ghost of a woman murdered there comes down out of the woods to draw water from the canal with a pail. Boys just beginning canal-life are enlightened with her story. Another famous character is [Crazy Aud?], who lives all alone in a little hut We saw her, and her dog which she keeps lied to a tree. She comes down to the boats with stories of people who come after her. Last year she came down to the Helena and complained that someone stole her door, and while she was talking we stole her picture."

It was a story of perfect contentment.