Please enable JavaScript in your browser settings.
Fullscreen MapMap Show Current LocationMy Location Get DirectionsDirections
“The corporation is a federation of expert men and great plants for united application of the best modern practice to every kind of ship work from construction to interior decoration.” 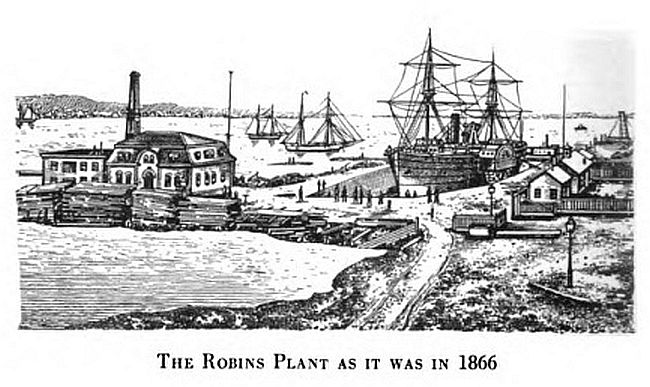 In 1921 Todd Shipyards published a book about itself, touting its many facilities and care of its employees.  The corporation was founded in 1916 when William H. Todd, along with some associates took over and merged Robins Dry Dock and the and the Dry Dock & Repair Company of the Erie Basin both of Red Hook, Brooklyn. The company also added the Tietjen & Lang Dry Dock Company, of Hoboken, and Seattle Dry Dock & Construction Company.  In 1917 they added the Clinton Dry Dock at the foot of Clinton Street, Red Hook which was originally the Poillon Shipyard.  By 1921, the Tebo Yacht Basin Company, in Sunset Park, Brooklyn, the Erie Basin Hoisting and Towing Company, the White Fuel Oil Engineering Company as well as a drydock in Tacoma Washington fell under their umbrella.

The company aimed to specialize in all things ships, from repair, remodeling, and building (they built all types of vessels from river barges to warships) to lengthening and refitting. 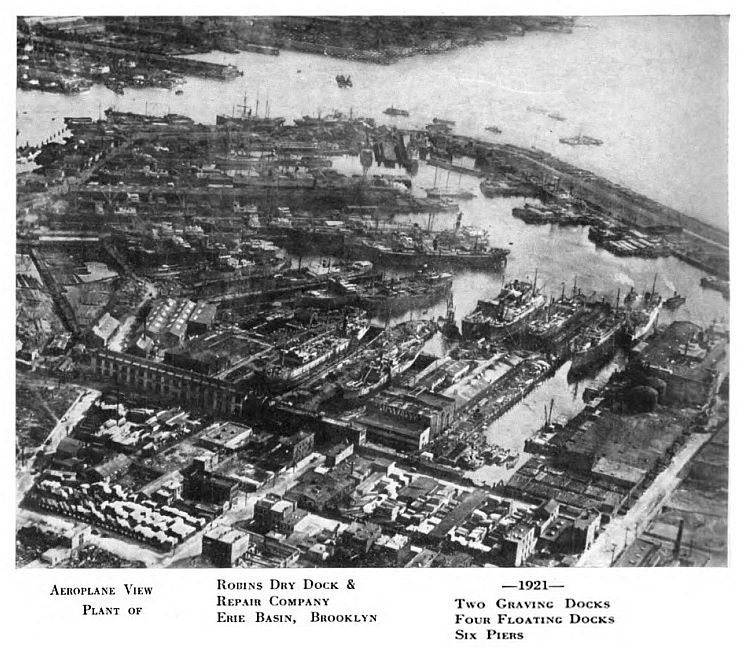 A massive company, they consisted of 17,000 employees, 8 power plants, 110 shops, several power plants and more. Utilizing the cooperation structure that was over a century old in the United States, the aim was to bind “all the organizations, yards, and plants of the cooperation into one powerful whole.” While each branch was tied together with a sense of unity by being a part of the same corporation, there was also a sense of composition which fueled innovation and productivity. This was especially important as they also aimed to complete with ship building in Germany and England for “maritime prestige”

Todd Ship Cooperators launched a safety-first campaign educating employees about most common accidents and how to avoid them. They also had a hospital at each location.

Overall, the giant corporation was instrumental in maintenance of said “maritime prestige” for the United States, making advancing what maritime work in the US looked like, and keeping it blossoming. 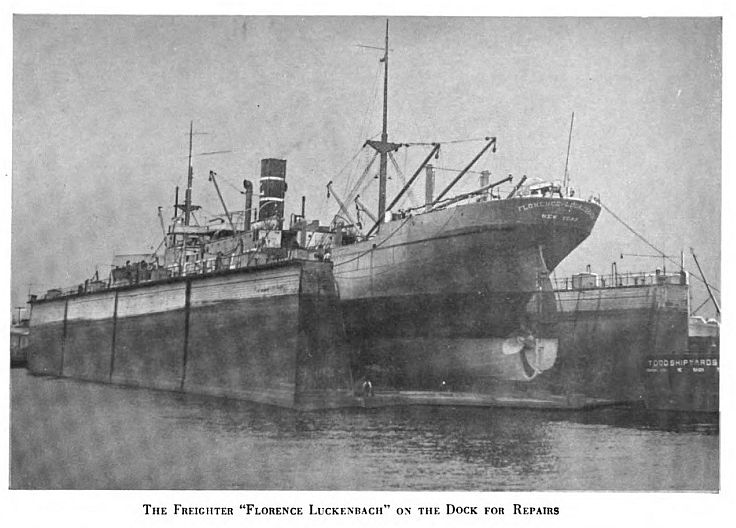 Red Hook relevant excerpts from Construction and Repair of Ships by Todd Shipyards, 1921.

In the year 1917, the old Poillon yard, at the foot of Clinton Street, Brooklyn, was acquired. Its gates had been closed for sixteen years, the single period was dilapidated, the buildings were beyond repair and there was barely sufficient water at high tide to float a small vessel.

Two piers, with a combined total length of 1400 feet, were conducted, three big shops and a modern power house, furnished adequate power for future as well as present needs were erected and a depth of sixteen feed of water at low tide provided by dredging fresh water mains were installed and the equipment of the plant completed by the construction of a new 8,800 ton floating dry dock.

The plant has proved a valuable addition to the resources of the Todd Shipyards Corporation and had the distinction of being the first to dry dock the S. S. Eclipse, the first electrically-driven freighter.

With an area of more than 30 acres and a water-frontage, exclusive of power lengths, of nearly a mile, the Robins establishment is the largest ship repair plant in this hemisphere.

It has six piers so situated that all ships berthed at them can be served by traveling power equipment direct from all the shops, whose electric and pneumatic power are brought to them at will. A complete industrial railroad system further binds the piers to the shops and other parts of the plant, ensuring every possible economy of time and effort.

Space, equipment, and facilities are such that 5,000 to 6,000 men can be effectively employed simultaneously without being delayed for material or room. Under this system the plant is able to take ships to full capacity of berthing and dockage room and prosecute immediate work on each individual vessel as soon as it enters.

The capacity and facilities of the year can be best illustrated by the fact that they have at one time constrained forty-four ships, the reapers too many of these being extensive. The shops, equipment and power both in machinery and men were such that none of the fleet had to wait while work was being completed on others. Each received its own ample supply of material and workers and was released for active service to the satisfaction of the owners.

These are six dry docks, of which two are graving docks and the others floating docks.

The two graving docks are the only docks of this kind owned by a private ship repair company in the harbor. They give the Robins plant unique felicity and advantage for many kinds of work.

These graving docks are side by side in a consistent part of the plant, and the water approach to them carries surfactant depth for almost any class of ship, the depth of the docks being No. 1, 26 feet and No. 2, 30 feet. Length and width are sufficient for the largest ships.