This is not the origin story for the comic strip Little Orphan Annie, created by Harold Gray and first published in 1924, but it is the story of a little orphan girl named Annie who was adopted by a wealthy family. 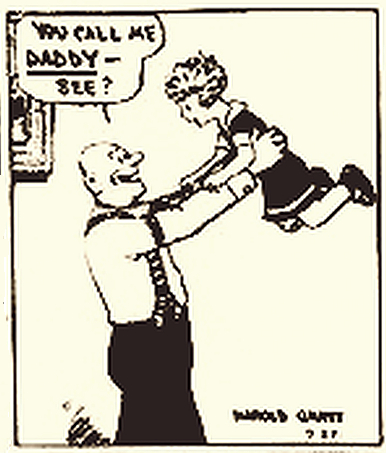 In 1908, the Annie of our story was found starving and crying on a NYC stoop by a policeman. She was taken to the New York Infant Assylum, and then to a foster home.  From there she was adopted by Harrison B. and Grace P. Moore.  Now "She has lots of playthings and the prettiest kind of clothes, and she goes out riding in a big automobile."

Why is this a Red Hook WaterStory?  Because Harrison B. Moore was an owner of the Theodore A. Crane's Son Company, which had a shipyard in the Erie Basin

New York, June 25. When little Annie Wright was found, a starving tot of eight months, on a stoop in West 15th street, about five years ago, she didn't know that the Fairy Godmother was going to find a rich papa and mamma for her.. But the Fairy God mother did, and now Annie lives in a big apartment house in East 62 street. She has lots of playthings and the prettiest kind of clothes, and she goes out riding in a big automobile.

Harrison B. Moore and his wife. Grace P Moore are Annie's new papa and mamma. They obtained an order from Surrogate Cohalan permitting them to adopt the girl.

Moore is vice president of the Townsend. & Moore Engineering Works and is also interested in the

Theodore A. Crane's Son Company, which has a shipyard in the Erie Basin. His father was associated in business with the late Collis P. Huntington. The Moores live at 27 East Sixty-second street, and had no children until they adopted Annie.

Annie was found by a policeman in October. 1908, crying lustily on a stoop in West Forty-fifth street. She was sent to the New York Infant Asylum where she remained until she was taken to East Orange and cared for by Mrs. S V. A. Murray. A little mare than two years ago the Moores began looking for a little girl, and Annie was sent to them.

As the weeks rolled on, the Moores became more and more attached to the little girl, until they finally concluded they couldn't get along with out her. So they went down to see Surrogate Cohalan. who readily cave them the permission to make little Annie a legal member of their family.