From the mid-1800s, lots of kinds of cargo were carried by canal boats from the U.S. inland to Red Hook to be shipped out around the world or to be used in local manufacturing. Grain was one of the largest imports, but some canal boats regularly brought in salt – to be used in the making of ICE CREAM. 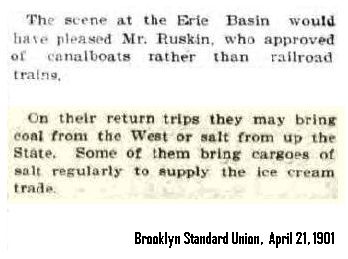 Ice Cream saloons were popular by the 1860s.  A classified ad in the Brooklyn Eagle, July 28, 1862 suggest that a location on Columbia Street, "two minutes walk from the Hamilton Ferry" would "suit admirably for a fruit and candy store and ice cream saloon".

Ten years later another store, about two minutes away on Columbia Street, was for sale: it was a candy, toy and fruit store, with ice cream and oyster saloon.   In the 1870s and 1880s oyster and ice cream saloons were commonplace.