Whoa! Everything you see and read is not true! Here are some cautions and examples.

Some maps are plans, not what is actually built.  Ditto engravings.  In the 19th century, promoters and real estate developers hawked ideas as they do now. Identifying the source can help distinguish between aspiration and fact.

The 1830s Red Hook Building Company is an example. They had plans to develop much of Red Hook and issued maps showing a street grid that covered Red Hook. The company tanked. It wasn’t until 100 years later that all those streets were built.  A "Brooklyn Basin" is shown on many maps, but was not built.  Also, it wasn’t until the 1900’s that all that is Red Hook now was filled. South east Red Hook was the last part of the current peninsula to become solid ground.

Sanborn maps are the most reliable. They are made for fire insurance, so they depict buildings and infrastructure that actually exist. They also describe the uses in those buildings and on those piers.

Media reporting, then and now, can contain errors which is why PortSide does extensive research to cross check between many sources. That means that when you are looking at a single “item” of externally created content in our database, it may not all be true. Chasing down what we suspect may be media errors has contributed to our content. That is how we discovered the real story of Louis Heineman, "the patriarch of Red Hook" and former barkeep who might have been the Sunny Balzano of his day.

AECOM's presentation document has many errors. Some are errors of omission, some are factual errors. One of the latter is a whopper, it is off by 100 years in describing when Red Hook became a maritime center and is wrong as to why:

AECOM says “Following World War II, the explosion of Manhattan as an office center squeezed out the warehouses and cargo handling facilities as higher and better uses pushed this industry to Brooklyn, the last of the undeveloped waterfront. For three decades Brooklyn thrived as a port; handling cargo in bulk, it was a labor intensive operation employing thousands of longshoreman and warehouse workers.”

Massive port development in Red Hook started in the 1840s.  Brooklyn’s working waterfront rapidly eclipsed Manhattan’s in the 1800s.  Brooklyn’s port was significant on an international level for over 100 years – not 30. Brooklyn's waterfront was not "undeveloped" after WWII. During WWII, it was very congested with ship building, ship repair and cargo handling to support the war effort  – on top of its normal functions. 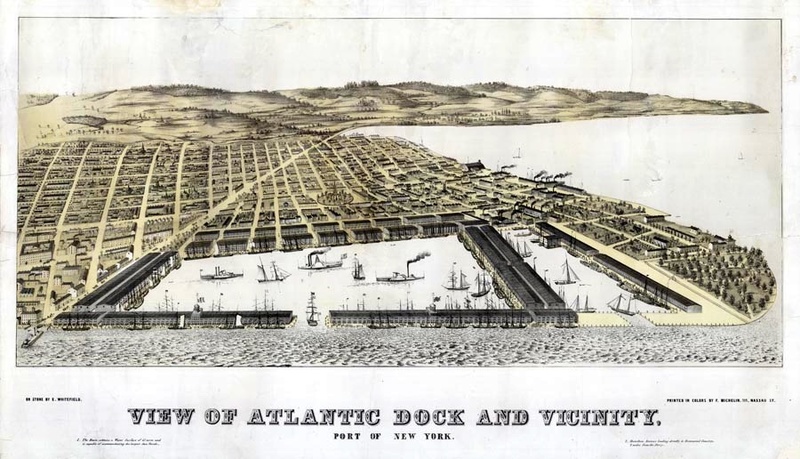 A mid-19th century engraving (above) is popular in contemporary Red Hook.  It hangs in many Red Hook businesses and homes.  It has been used to illustrate "how great Red Hook was." It shows a rotary with a church in the center, and a second basin to the right of Atlantic Dock.

We find no evidence that there was ever a second basin or a rotary; and Red Hook was not developed to this level until the 1930s. At that point, the big ballfields and pool, not buildings, are constructed in the furthest eastern blocks.  This engraving feels like a real estate promotion piece.

Similarly, there are renderings of maritime infrastructure that never came to be:  Brooklyn Basin (see below) at the foot of Columbia Street with breakwaters to the east.  We have not found evidence that this was ever built either. 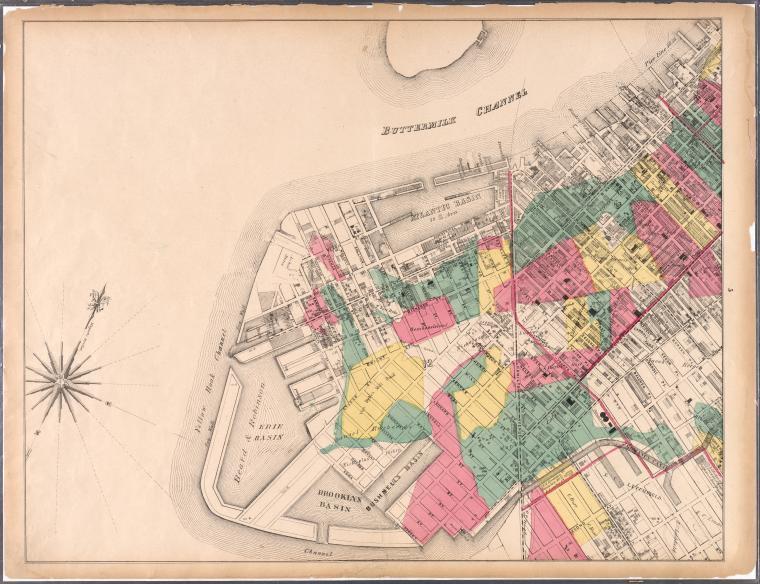