The Atlantic Basin was the home to hundreds of Erie Canal boats during the winter months. Families, including children, lived on the the boats, tending their floating homes, until the ice melted and they could begin shipping produce again.  The families of the canal boats, became part of Red Hook life,  which included the kids going to the local schools. 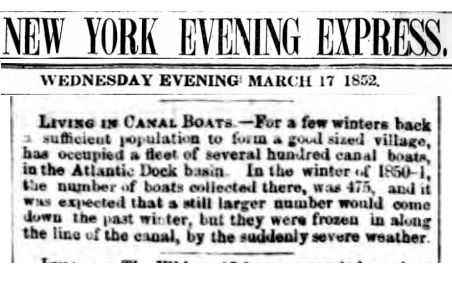 Living in Canal Boats -  For a few winters back a sufficient population to form a good sized village, has occupied a fleet of several hundred canal boats in the Atlantic Dock basin,  In the winter of 1850-1, the number of boats collected there, was 475, and it was expected that a still larger would come down the past winter, but they were frozen in along the canal, by the suddenly severe weather.