Please enable JavaScript in your browser settings.
PortSide asked on the MARY A WHALEN facebook page for clarification on the bell and jingle code.  Past crew of the MARY and similar bell boats responded with quips, memories and answers.

A cheat sheet for the bell and jingle code hangs in the fidley of the MARY A. WHALEN. It can be seen in the related entry Bells are Direction, Jingles are Speed which lays out the system.

The bell and jingle code was used by the captain of the MARY A. WHALEN, and other “bell boats,” to tell the engineer what speed and direction he wanted. It was the engineer, standing in the windowless fidley – the central space in the ship's house above the engine room and two levels below the captain in the pilot house, who controlled the levers of the ship's engine. The captain, pulling on cables running through the ship, would make make the bell and/or jingle ring and the engineer (most times) would quickly follow the command.

Looking for clarification on the bell and jingle code, as written on that cheat sheet, PortSide reached out on the MARY A WHALEN facebook page. We were wondering what the code for stop was as well as anything else we could learn about the system and its use. Past crew of the MARY WHALEN, and similar bell boats, responded with quips, memories and answers.

What follows are just select snippets of the conversation. The entire Facebook conversation as well as The Bells of New York, a two page description and history of the system written by Earl Maxfield Jr. of the Maxfield Marine Service on July 4, 1976 and revised July 4, 1990, contributed by Neil “Nobby” Peers, are attached as images below. Read the whole thing for more detail, recollections and the reuniting of old friends.

We now know who wrote the note. 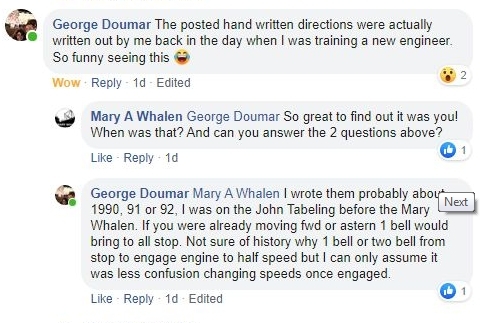 George Doumar - The posted hand written directions were actually written out by me back in the day when I was training a new engineer. So funny seeing this.

I wrote them probably about 1990, 91 or 92. I was on the John Tabeling before the Mary Whalen. If you were already moving fwd or astern 1 bell would bring to all stop. Not sure of the history why 1 bell or two bell from stop to engage engine to half speed but I can only assume it was less confusion changing speeds once engaged.

We learned that engineers did not always pay attention:

Whit Petrie – I sailed aboard a bell boat tanker with a nearly deaf engineer who loved watching soap operas on TV. One day I rang down for slow ahead from full... no response. Had to ring the general alarm to get his attention. LOL!

He was in the galley with the door closed.

We learned something about how the engine of the MARY WHALEN worked:

Richard Conlin - Many of those direct reversing diesels will not start on “slow”. You must start it on ½ and then come back to slow.

George Doumar – true but the Whalen only start[ed] with full fuel and then you backed off quickly, it was all about touch so you could conserve air

George Doumar – 1/2 speed was utilized on the Whalen [...]To be honest 1/2 speed ahead was hardly ever utilized with the exception of the gowanus canal and newtown creek and I don't think that 1/2 astern was utilized at all, only to check down.

Robert Stevenson Thomas – She could barely get out of her own way, she really didn't need a plethora of choices.

George Doumar – isn't that the truth. She had dead slow and even deader slow.

Carl Hausheer – You could tell who was captain by the way they rang the bells.

And look out the porthole

George Doumar – a little secret, we engineers always knew if we were slow to the four bells and ran aground it was Capt. License not ours so a look see out the porthole was called for so we knew what to brace for. lol