Please enable JavaScript in your browser settings.
Fullscreen MapMap Show Current LocationMy Location Get DirectionsDirections
"There are few, if indeed any in their line in this city who are more widely or more favorably-known than R. C. Layton & Co., warehouseman and forwarders. They have capacious and well-equipped warehouses as above, and Nos. 38 to 68 Atlantic Dock, Brooklyn, illustration herewith. They have first-class facilities for storing, transferring, etc., and enjoy a very substantial patronage. "

The publication New York, 1894. Illustrated brings readers to New York City, 1894 where companies like R. C. Layton & Co., flourished in an increasingly industrialized and connected new world. Business (as demonstrated by the other examples in this article) was booming in the shipping and storage sector. R.C. Layton & Co. in particular, were known for their “warehouseman and forwarders”, and were described as having “capacious and well-equipped warehouses as above, and… first-class facilities for storing, transferring, etc.” 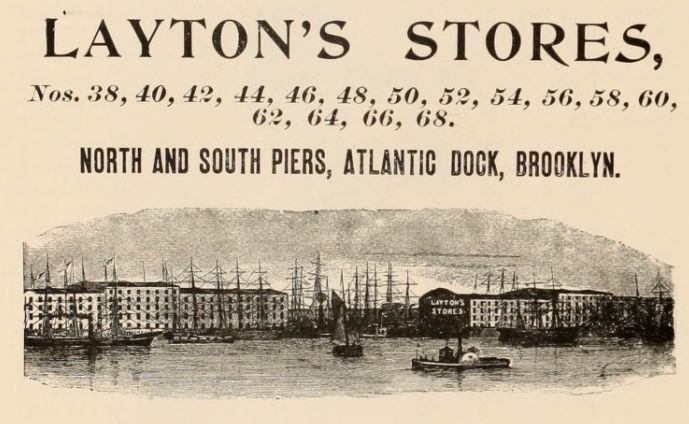 R. C. Layton & Co.’s warehouses were equipped especially for cash crops like sugar, cotton, and tobacco, with their “substantial, six-story and basement fire-proof structure”, which was described as being “clean, perfectly dry and thoroughly ventilated...” With the population boom that followed the industrial revolution, the production and circulation of such products was especially vital. Success was also made possible in other corporations as they erected offices in different states (Massachusetts and Philadelphia), as well as overseas (England and France). These offices were only possible due to a more industrialized country as well a more globalized world.

In the middle of a new world in terms of technology and innovation, the businesses described in their article prospered due to their ability to capitalize on the enterprising spirit of the times, and the new technology that it made available.

In the year 1894, R.C. LAYTON & CO., Warehouseman and Forwarders was run by its namesake R.C. Layton and by F. E. Henderson and had been in operation for 17 years

R.C. LAYTON & CO., Warehouseman and Forwarders, Office No. 64 South Street, N. Y. - There are few, if indeed any in their line in this city who are more widely or more favorably-known than R. C. Layton & Co., warehouseman and forwarders. They have capacious and well-equipped warehouses as above, and Nos. 38 to 68 Atlantic Dock, Brooklyn, illustration herewith. They have first-class facilities for storing, transferring, etc., and enjoy a very substantial patronage. They have been established for the past seventeen years, and from the start have been highly prosperous. The firm is composed of Messrs, R.C. Layton and F. E. Henderson. They are gentlemen in the full prime of life and are natives of New York State. Both are well known in commercial and maritime circles. Their New York warehouse is a substantial, six-story and basement fire-proof structure, and has a number of separate compartments. It is clean, perfectly dry and thoroughly ventilated, and all conveniences are provided. No fibrous goods are stored here. Layton’s Stores, Atlantic Dock, Brooklyn, cover an extensive area and are excellently adapted for the storage of sugar, cotton, tobacco, flour, provisions, lard, etc., etc,. For home trade or texport and a large number of trucks and delivery wagons, and employ as many as 150 in help. Merchandise of all kinds is carefully stored by them, at reasonable rates, and warehouse receipts are issued on goods on storage with them, upon which they make advances.

PERRY, RYER & CO., Custom House Brokers, Forwarders and Notaries, Nos. 65 Neaber Street and 20 Exchange Place. - The value and importance of the services rendered to the mercantile world by the custom house broker in a large centre of trade such as New York, are known only to the initiated, and are but dimly understood by outsiders. A leading firm engaged in the business here is that Messrs. Perry, Ryer & Co., who are also general forwarders and notaries, and whose operations are conducted on a broad, sounds and substantial basis. The business of this house was founded in 1878, by Messrs. Edward W. Perry and John C. Ryer, who subsequently admitted to partnership interest Messrs. Edward T. Coons and G. Fred Esty, who had been connected with the concern from its inception. The firm is an influential and enterprising member of the commercial community and its business is conducted with an energy and ability that places it in the foremost rank. Its operations are by no means confined to this city but also to Boston and Philadelphia, while its correspondence are to be found in all the great trade centers of the world. The Philadelphia office, E. H Bailey & CoRepresentatives are at No. 406 Liberty Street, while the interests of the house is Boston are looked after by the Stone & Power Company, of No. 53 State Street. Messrs, Perry, Ryer &Co.’s corresponds in London are Hiekie, Corman & Co., No 14 Waterloo Place; Paris, George Dunlap & Co., No. 3S Avenue de l’Opera; Breman and Hamberg, Louis Delius & Co.; Havre, J. A. Laude & Fils; Leghorn, William Miller; Liverpool, James Moss & Co., No 31 James Street. The firm transact a general custom house brokerage and forwarding business, attending to the passing and entering of imports through the customs, and forwarding the same to destination. Their facilities are the very best, and their customers are to be found all over the country.

H. MEYER & CO., General Storage Warehouses, Nos. 4, 6, and 8 Washington, 3 and 4 West and 2 and 3 South Street. - One of the most extensive concerns engaged in the general storage warehouse and forwarding business in the metropolis, is that of J. H Meyer & Co., who have seven large warehouses at the above addresses. These warehouses are all for the storage of free mregendice, including tears, which may be here stored in bonds. The business was originally founded in 1869, by McMullen, Meyer & Co., who were succeeded by Peck & Meyer, and in 1878 the present firm came into control, the co-partners being Messrs. J. H. and H. B. Meyer. Both gentlemen are natives of New York, and are popularly known in the commercial circles for their enterprise, liberal methods and reliability. The firm conducts a general business in weighing, carting and forwarding goods to all parts of the United States or forgin countries. Their warehouses are of brick, are of spacious size, and provided against all possible contingencies of loss by fire or theft. Merchandise of all kinds may be safely stored here, and insurance, when desired, is effected at the lowers premium rates,