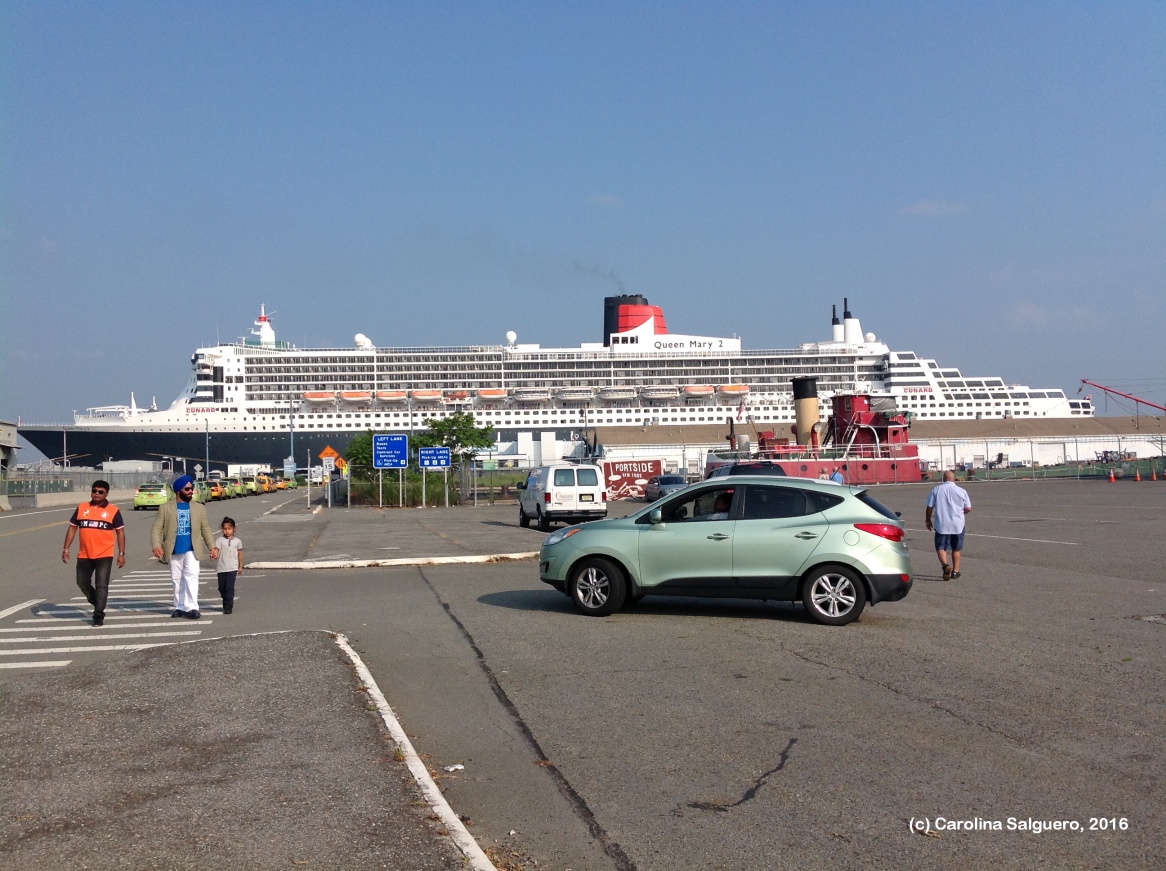 The Brooklyn Cruise Terminal (BCT) opened in 2006 in Atlantic Basin, and according to the official website "offers all the services and comforts expected from a world-class cruise facility including 200,000 square feet of flexible terminal space, sophisticated gangways, separate bus stalls, and ample parking. Dedicated embarkation and debarkation areas allow passengers to get on the ship without waiting."

Address: 72 Bowne St, Brooklyn, NY 11231
The official address is not much help since it's an invented address that doesn't correspond to Google Maps road labels.

Bowne Street dead-ends into the entrance to the sprawling industrial park of "Atlantic Basin," and then Google Maps, or someone, decided to revive historic names for wharves that no longer exist and call the internal roadway Bowne Street from the entrance through the left turn and down the stretch running southerly, and then when that hooks right, Google Maps suddenly calls it Clinton Wharf. Below is how, when and where you can enter.

Getting to BCT, Atlantic Basin entrances:

Drivers, we do NOT recomment that you rely on GPS alone to get to BCT since the program does not understand that chain link fences surround the Atlantic Basin complex and you can't enter from all the street ends.

This is Port Authority property, leased to NYC Economic Development Corporation (EDC), and BCT is operated by Ports America. BCT is located on Pier 12 which forms the west side of the Atlantic Basin waterspace.  Pier 11 is the east side.

In between Pier 11 and Pier 12 is the NYC Ferry Red Hook ferry stop under a curved white canopy reached by a long gangway.

On Pier 11 is PortSide's historic ship MARY A. WHALEN. We had our beloved pandemic PortSide Park near our ship from May 2020 until September 2022 when the EDC abruptly evicted it.

To see the ship schedule, look up the Brooklyn ships on the list here.

People often refer to all the ships at BCT as cruise ships, but did you know there is a difference between an ocean liner and a cruise ship? The answer is here.

The QUEEN MARY 2 is an ocean liner usually going back and forth between Brooklyn and Southampton, England. The CARIBBEAN PRINCESS is a cruise ship.

When ships are in, the public can get into the terminal and quite close to the ships. When no ships are in, the gate (parallel to the northern end of Ferris Street) is locked, and the facility is secured according to Homeland Security MARSEC rules.

Ship calls at the terminal have fluctuated over the years, but it's never been super busy.  However, that's changing in 2023. On December 7, 2022, NYC's Mayor Eric Adams announced that MSC ships would be calling regularly in Brooklyn. Note that the official statement says that seven Red Hook parks will benefit from a large MSC donation. That is false; the parks are community gardens in the Columbia Waterfront District on the other side of the highway.

Other uses of BCT

When cruise ships are not in, the interior space of the terminal building is used for diverse, large special events such as trade shows, conferences, a maritime career day for high school students, a gathering of 5,000 Hassidic rabbis, a Hassidic wedding for 4,000 (see video below), and part of the Formula E car race.

That is, until Covid shut down large gatherings for 2+ years. BCT actually became a Covid emergency hospital around April 2020; however, the hospital was never used. One lasting positive result of the hospital installation is that wifi was finally installed! For years, European passengers whose phones have different (non USA) SIM cards could not access the internet without wifi.

January 21, 2023 the neighborhood was stunned to learn that the cruise terminal's latest pop-up use is to be an emergency refugee center (HERRC) which should clear out for cruise season in the spring when the MSC ships begin. Up to 1,000 men may be housed here. A major vendor for the HERRC is the wonderfully-named Granny's Alliance, and this profile of the company provides insight into the growing field of disaster response management services due to climate change's making for more (and more devastating) hurricanes, tornados, wildfires, and such.

There is a long-running issue pertaining to shorepower at BCT, a system whereby ships plug into the electrical grid rather than running generators that emit a lot of pollution.

The short version of it is that the original plans for BCT did not include having shorepower. The community demanded it, with Adam Armstrong being the strongest voice.  The addition of shorepower was finally approved; but the EDC did not install the right kind of crane/jib to lift up the giant electrical cable to the ship, meaning it can't be used for ships other than the QM2. In some cases, ConEd has failed to supply the correct level of power, and sometimes the QM2's own connection failed.

The result is that the shorepower has worked very rarely. The definitive source about all this is Adam Armstrong's blog, A View from the Hook.  This New York Times article provides an overview as of December, 2019.

The Atlantic Basin dates to the 1840s when it was most often known as Atlantic Dock. It was a magnificient, innovative, vertically integrated maritime complex with handsome brick and granite warehouses. Its creation immediately sucked maritime businesses out of Manhattan.

The current cruise terminal building was converted from a freight terminal warehouse that was installed in 1954 during a modernization that replaced the 19th warehouses and reduced the Atlantic Basin waterspace by more than half. The water used to reach almost to Imlay Street. More about historic Atlantic Basin in Red Hook WaterStories here.

PortSide believes that the EDC should be managing BCT and the whole Atlantic Basin complex in ways that benefit Red Hook more, that really deliver economic development, and that finally provide space they promised for PortSide from 2008 into 2011; so in late 2022, we launched the campaign #rethinkEDC for a better PortSide, a better Red Hook, and a better NYC. The EDC is NYC's largest landlord and manages a huge portfolio of diverse project including rezonings, planning resiliency flood protection infrastructure, running the NYC Ferry and more. 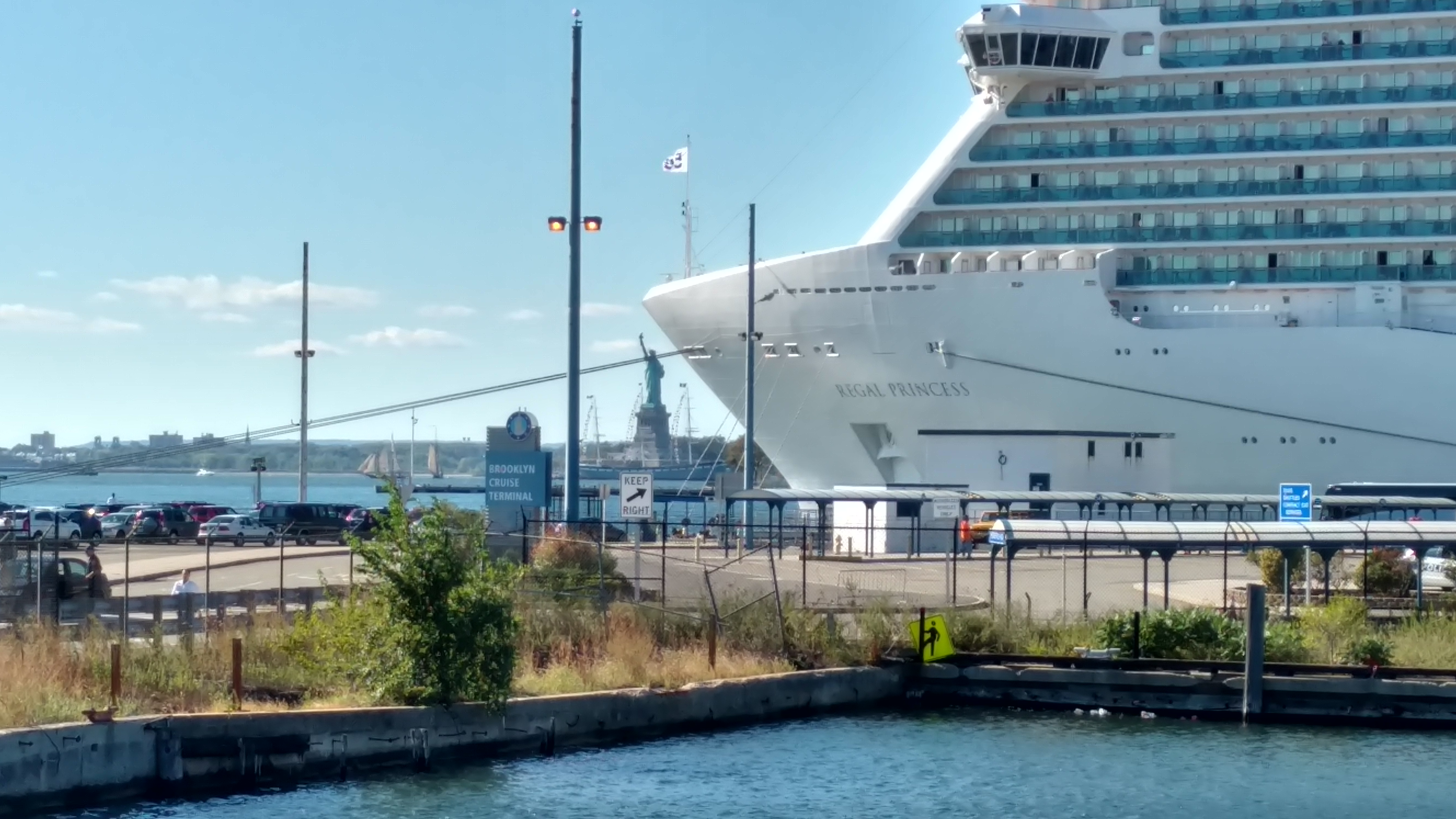