During Prohibition (1920 -1933), the many, bustling working piers of Red Hook made this neighborhood a good place for smugglers to move large quantities of alcohol, often using innovative speed boats to evade federal agents.

On June 3, 1922, at the foot of Clinton Street, next to Ira S. Bushey's, the company that built and ran PortSide's tanker MARY A. WHALEN, agents seized an ocean-going tugboat laden with alcohol that had been dispatched from NYC to get it in the Bahamas!

Mentioning a hail of bullets, speedboats, rifles thrown overboard, the names of crew and their addresses, the article provides vivid details of the smuggling life, including a raid on the tug by another smuggler vessel offshore. 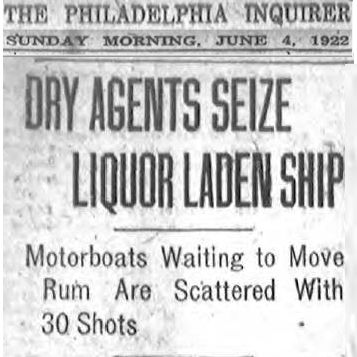 “NEW YORK, June 3 – Prohibition enforcement agents this morning seized the ocean-going tug Ripple, which lay at the foot of Clinton Street, Brooklyn and fired thirty shots at a fleet of motor boats that had gathered around the tug apparently to take off cargoes of liquor...”

“This morning’s raid was made by agents under John F. Parsons, chief agent. All were dressed as longshoremen and searched the waterfront in the vicinity of Hamilton Avenue ferry, where it had been learned the tug would attempt to land her cargo”…